How Much Will 4/20 Increase my Sales?

As we all know, April 20th is a special holiday in the marijuana industry. For store owners, it's Christmas and the 4th of July and New Year's rolled up in one giant blaze of retail glory.

How big is the impact on sales, specifically? How much inventory should your store plan to stock? To answer these questions, let's look at what happened last year. For each store in the state, we looked at the sales on 4/20 compared to the average daily sales for the rest of the month of April. Because 4/20/2016 was a Wednesday and 4/20/2017 falls on a Thursday, we think it is reasonable to predict 2017 sales increases based on 2016 behavior without correcting for day-of-week effects.

In terms of what goods are sold, flower remains king; but the biggest increase by percent is pre-rolls (+82%) followed by concentrates (+72%). Intuitively, the preroll increase makes sense given that 4/20 is often celebrated socially with the passing of a joint. 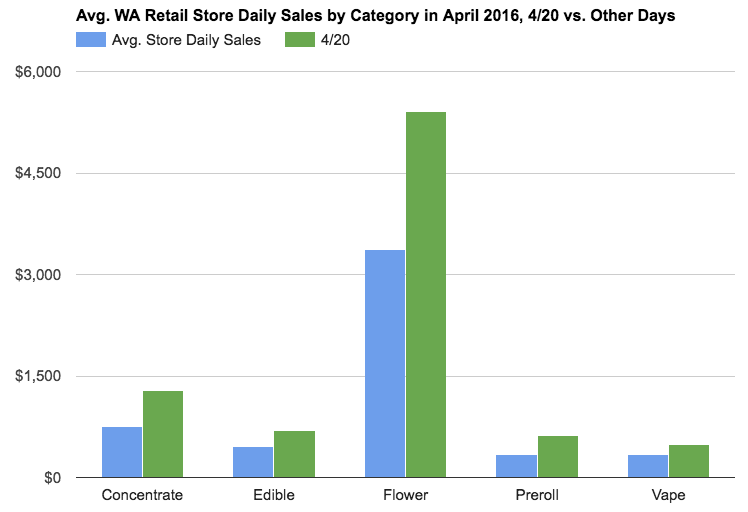 If you're a retailer and want to plan your 4/20 inventory in more detail, we've made a full data set available here.

(As a follow-up clarification: this post takes a per-store perspective, so when we compare two stores - say, a very big one and a very small one - they are weighted equally. If you are interested in the statewide sales impact of 420, please see Jim MacRae's excellent blog post.)

Upgrade at any time for access to the latest data, and more features.

We can email you a link to reset your password.

Please check your email to finish signing up: None.

Don't see the message yet? Check your spam folder, or click here and we'll send you another. Want to use a different email? Click here to sign up again.

OK! We sent you another email.